Marlene
An Iraqi mother-of-two we met when in Jordan
Everything has gone from our life. But God is steady and His word is steady.
Voices of Iraq 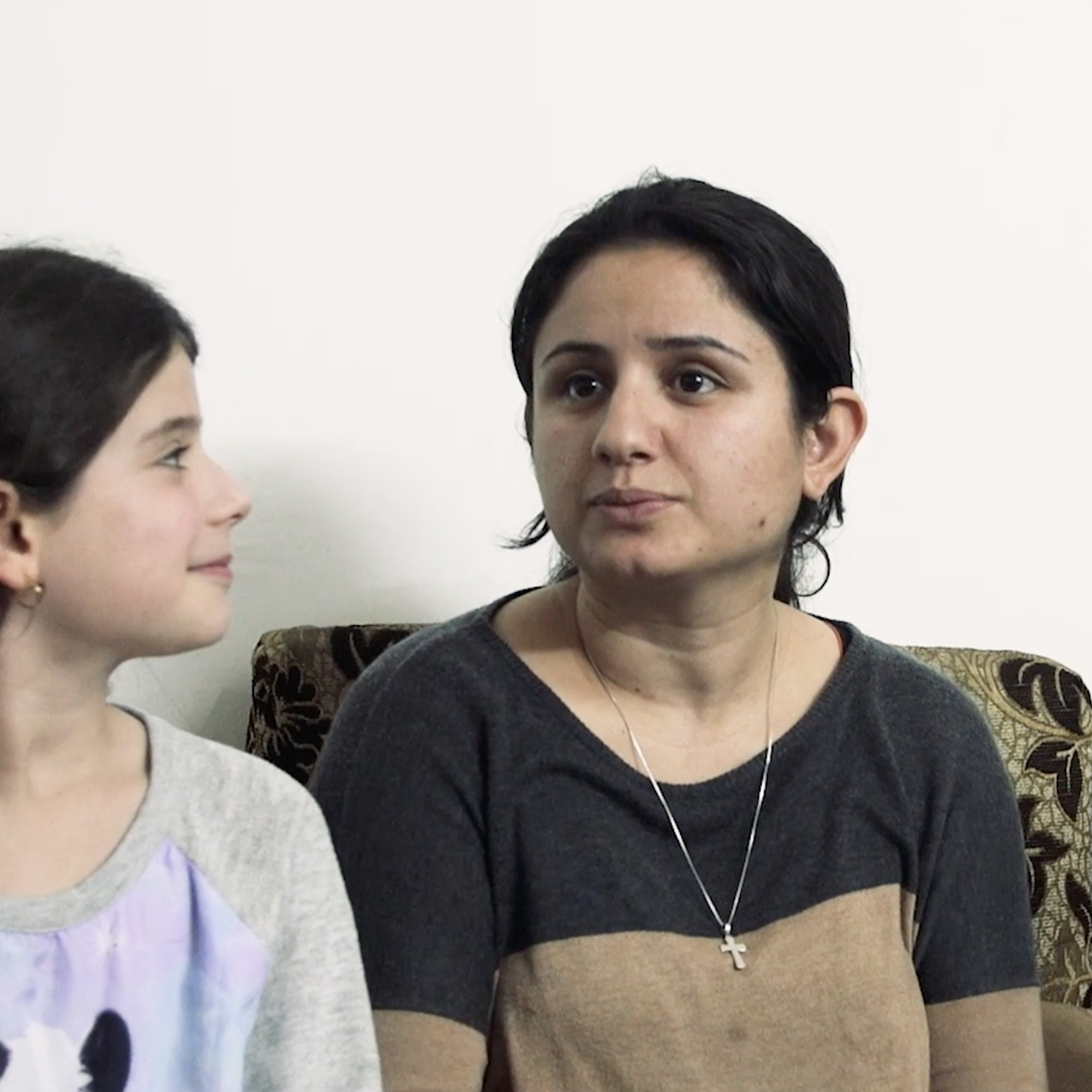 Marlene’s transformation from Iraqi citizen to refugee in exile began with the brutal murder of her father. Sat between her two children, Marlene recounts the shocking details of how her father was publicly executed by Al Qaeda on the streets of Mosul.
Marlene speaks: “My father was working as a guard at the Holy Spirit church in Mosul. He was threatened because they did not want any Christians in Mosul. Al Qaeda believed Mosul belonged to them.
“We didn’t know that the terrorists had threatened him three times. On the fourth time when he went back to work, they killed him. At first my brother said no-one should retrieve his body because we’d heard that there was a sign on my father’s chest which read: ‘This Christian does not deserve a tomb.’ They threatened to blow up anyone who moved the body.”
Bravely, under cover of darkness, they did manage to retrieve his body. Later when ISIS came they had to flee their home. Marlene continues;
“We were tired of escaping. We were sleeping on the sidewalk. We made a tent where we slept with my husband’s family;there were 23 people. All were Christians who are now in Jordan, Lebanon and Turkey. Everyone wants to get out. Everything has gone from our life. But God is steady and His word is steady. Whenever we fall down we see His hand upon us.”
After months of living in the church cemetery, Marlene and her family travelled to Jordan. They gave up ever seeing their home in Mosul again.
As refugees in Jordan, they discovered that there is no support from the UN. Christians cannot go to the UN camps for fear of sectarian reprisals. As in Iraq, their only hope was to find a church which could help them. They found one in Madaba, a city to the south of the capital Amman. The church is the Full Gospel Church. It is one of four churches we partner with in Jordan. That was four years ago…
See what happened to Marlene in part two
Share Marlene's story
Discover what happened next as Marlene's story continues...
Despite the hardship Marlene and her family have suffered, they have not lost their faith.
A church, a beacon in the dark
Thanks to our supporters, we were able to pay for a small apartment for Marlene and her family. It wasn’t much to look at but it was everything to them. We provided the family with food coupons so they could eat. Iraqi refugees are not allowed to work in Jordan. Marlene’s husband wanted to work, but this is not allowed.
Over time, Marlene became more involved in the church at Madaba. The last time we saw her she was leading the singing of worship songs, alongside a small group of women. As she said in her interview with us – “Everything has gone from us but He [The Lord] is steady and His Word is steady.”
After three and half years in Jordan, Marlene and her family eventually were accepted for asylum in Australia. Of the 120 families we are helping at the Full Gospel Church in Madaba, they are one of the first families to go to Australia. They are no longer refugees; they are residents of a new country.
How strange it must feel to be without a country, without a home and then to find one. Contrary to the grandstanding of politicians, the British government has done little to help Iraq’s persecuted Christians. After the airstrikes and ground troops, the Christians have been left to fend for themselves. That is why your support is so vital.
We hope to update you on Marlene’s new life in the near future. We’re always updating these continuing stories, so check back soon!
Share Marlene's story
Continue reading...
View all Voices of Iraq stories
"Money sent by Western countries to the Christian areas through the government does not reach the Christians"
Read Lara Zara's story
"We feel the power of community here"
Read Leka, Ashwaq & Stavro's story